Trauma and anxiety eased by the healing power of horses 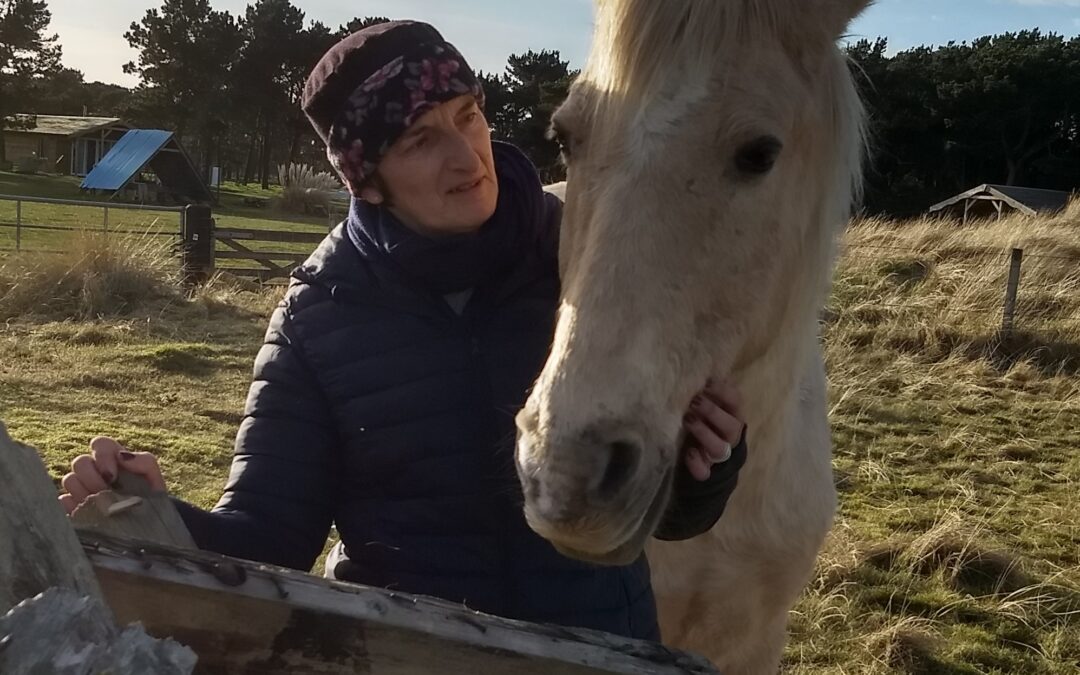 This article was written by Sandra Dick, The Herald Newspaper, 6th September 2021.

In a field, with warm sunlight streaming through the cracks in the wooden shelter and a soft layer of sand covering the ground, a woman rests her head rest on a pony’s back and closes her eyes.

In its gentle presence, childhood trauma, the stress of losing her father, anxiety over her son’s forthcoming marriage and a host of fears rooted in the past, are soothed away.

There were no needs for words, says Lynda Murphy, recalling her first experience of equine therapy, an unusual form of ‘counselling’ involving spending time outdoors in an East Lothian field with a herd of horses.

Instead, the little Shetland pony’s calm acceptance of her presence, the soft rhythm of its breathing, its strength combined with its calm demeanour helped trigger an overwhelming and, she says, life-changing response.

“It’s a very deep thing,” she adds. “They are very sensitive animals, and you come into a different way of ‘being’ with them.

“I felt the fear lifting,” she adds. “You are in the moment with these horses, they sense something with you, and seem to know what is troubling you.”

Midi Fairgrieve has seen similar responses many times since she launched her Awakening Through Horses sessions last autumn.

As one of a handful of Scottish experts in Equine Assisted Personal Development, her group of four horses have become therapists in their own right; silently soothing away stresses, helping some overcome deep-rooted childhood trauma, others bereavement, career concerns, relationship difficulties or to regain long lost confidence.

Some who have arrive at the horses’ Tyninghame field are seeking support in the wake of the pandemic’s additional pressures on their mental health.

“Covid can be an added stress that has broken the camel’s back,” adds Midi. “This is like counselling with the help of horses, and I am the facilitator.”

Horses have long been used to support people with a range of special needs, both physical and mental, through riding and grooming sessions and equine-assisted learning.

Their healing benefits stretch back to the ancient Greeks who used horses as a therapeutic aid for people with incurable illnesses, while there are 17th century reports of therapeutic riding to help patients overcome gout, neurological disorders and depression.

According to Midi, the power of equine therapy comes in what appears to be horses’ special ability to sense human feelings. While being immersed in nature and feeling the powerful yet gentle animal’s close presence, appear to trigger a healing process.

“There are lots of reasons why it’s good,” she explains. “It’s outside in nature, it’s not a traditional format of counselling – a lot of people might feel that being ‘one to one’ with a counsellor is almost confrontational.

“With this, there’s air between you, and space. It feels less daunting.  The horses are in a very ‘present moment’ state, free in an 11 acres field, there’s no equipment or riding gear.

“They are highly sensitive beings and seem to sense all of our emotions,” she continues.

“We might say one thing, but if our body language says another they will pick up that and they may walk away.”

Many come seeking support for traumas rooted in childhood and experience a deep and often highly emotional connection with Sparky, the Shetland pony, two Andalusians called Sultan and Moreno, and a female cob, Sylvan.

“I have had clients weeping in the field because they feel so moved by the connection they have with a horse. It’s very therapeutic.”

Lynda, 65, says she originally thought the therapy would simply help conquer her fear of horses and soothe anxieties which other forms of therapy had failed to conquer.

In the end, it helped her come to terms with deep-rooted feelings from her childhood.

“My father had died in Ireland not long before. We were only allowed seven at his funeral and it was quite hard going,” she says. “Our son was getting married, and all the changes had made me very unsettled.  I was telling myself I was coping but I was overwhelmed. Midi explained that if I have a fear of horses, there might be something else going on.”
After initially connecting with Sparky, the Shetland pony, Lynda developed a strong bond with the mare, Sylvan.

“I felt love from this mother horse that I never experienced from my own mother,” she says. “She was so solid and didn’t flinch when I got near which was strange for me.

“I was a silent child with a very domineering mum; I used my eyes a lot to sense what was going on and because I did not have a voice.

“I felt there was a power in looking at this horses’ eyes. She was healing a wound from my childhood by being solid and allowing me to get close to her.

“It was very soulful and deep.”

For Jodie Campbell, a 20-year-old final year economics student at Edinburgh University, equine therapy was intended to help her reboot her approach to relationships, university and the complex decisions that come with planning her future.

“I needed to reconnect with my feelings,” she says. “I was always thinking with my head.”

“Initially the horse walked away from me, but Midi explained they reflect the energy you are giving off – them walking away was mirroring how I was dealing with things.

“As soon as I calmed my energy and was comfortable and relaxed, they stayed with me. They wanted to be around me which was fascinating.”

“It has rebuilt my confidence at university and changed my underlying pattern of thought and feelings.”

She believes the sessions have also had a physical benefit.  “I was struggling with a long-term injury preventing me from playing competitive tennis.

“I got better with lots of chiropractic and physio treatments but for some reason I couldn’t quite get past it. After Midi’s sessions with the horses, I started to feel so much better physically.

“Most of the pain is gone now which shows the relationship between mind and body.